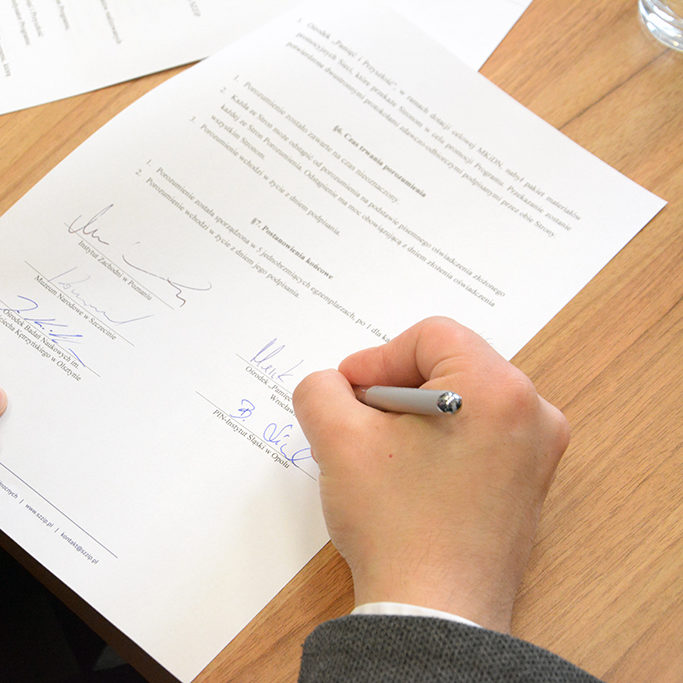 The rules, form and scope of cooperation between institutions cooperating within the Western and Northern Territories Network are governed by the Memorandum of Intent signed on 24th March 2017. During the meeting of the Network Steering Committee in Wrocław, the Directors of all five institutions comprising the Network officially joined the programme, establishing cooperation aimed at deepening research on the complex history of lands incorporated into Poland after World War II.
The content of this Memorandum is a kind of interpretation of the basic goals and intentions of the initiators and implementers of the programme, therefore it is presented below in its entirety.

The Memorandum has been signed by:
1. Zygmunt Wojciechowski The Western Institute in Poznań, Mostowa 27a, 61-854 Poznań, represented by Michał Nowosielski;
2. The National Museum in Szczecin, Wały Chrobrego 3,
70-500 Szczecin, represented by Lech Karwowski, the tasks of which resulting from this Memorandum will be carried out particularly by the “Przełomy” Dialogue Centre – a branch of the National Museum in Szczecin;
3. Wojciech Kętrzyński The Scientific Research Centre in Olsztyn, Partyzantów 87, 10-402 Olsztyn, represented by Jerzy Kiełbik;
4. The “Memory and Future” Centre in Wrocław, Grabiszyńska 184,
53-235 Wrocław, represented by Marek Mutor;
5. The State Scientific Institute – Silesian Institute in Opole, Piastowska 17, 45-082 Opole, represented by Bernard Linek;
– hereinafter referred to as Parties.

In the belief that:
– the historical and cultural values created by Poles in Western and Northern Territories after the period of great suffering and devastation of World War II had a great significance in the history of Poland, continued the best traditions of the Republic of Poland and had an influence on overcoming the division of Europe after the Yalta Conference;
– the aforementioned values still have power and educational importance for the cooperation between the peoples of Europe and in the shaping of a just international order;
– the post-war history of Western and Northern Territories is a story about important and breakthrough moments in the history of Poland and Europe, as well as in the history of Poland’s relations with other neighbouring nations, without which it is impossible to understand the contemporary world.

Whereas:
The Parties carry out research and work to establish a scientific basis for broadening their knowledge of the history of Western and Northern Territories;

– The Parties initiate and implement a number of educational and promotional projects;

– Each of the Parties gathers collections of various kinds, documenting the history of Western and Northern Territories;

– The Parties expressed their willingness to cooperate and to pool their efforts in order to achieve the best possible results.

The Parties reached the following agreement:

2) joint promotion of projects carried out by each of the Parties,

3) systematic exchange of information and coordination of activities;

4) mutual assistance in achieving the objective referred to in section 3;

5) joint representation in contact with public authorities on matters concerning all Parties, in accordance with the statutory objectives of each Party.

2) ensures the continuous circulation of information between the Parties;

3) organises regular seminar meetings on the issues of the Programme;

2) carries out work related to the development of the concept of the activities of the Programme, which shall be submitted to the Steering Committee for approval;

3) coordinates the work of the Steering Committee and the Working Group;
4) maintains the Programme website at www.szzip.pl and ensures ongoing circulation of information between the Parties.